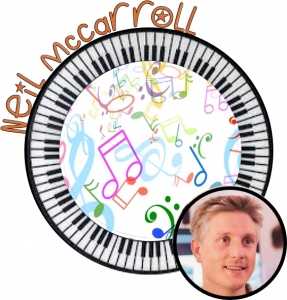 Neil studied classical piano from age 5 and has always been batty about music. While studying under renowned musicians and composers including Philip Hammond and Michael McGuffin, and pursuing his ABRSM exams, he was awarded the music scholarship to Campbell College Belfast and went on to study GCSE and A-level Music, soaking up folk, rock, classical and popular music styles, and winning various prizes for playing and composing. He also led the school’s choir and pipe band, where he was Drum Major and also taught the snare drum

He holds an MSc in Composition for Screen from Edinburgh University where he studied composing, orchestration, conducting and interactive sound-design, with a specific focus on music for films and games. Recent work was nominated for a Best British Animation award at the Edinburgh International Film Festival and he has participated in workshops and presented at conferences throughout Europe. He also holds an MEng in Electronic Engineering and various professional qualifications in Project Management and Process Improvement.

Over the years, Neil has played a variety of instruments in bands covering many musical genres, performing and recording with several number one artists. He currently enjoys playing keyboards for the 12-piece soul band ‘Soulacoaster’. He volunteers as a music group coordinator for the Edinburgh Headway brain-injury charity, and has facilitated composition workshops for primary school children. Neil has recently completed training with the National Youth Choir of Scotland in the Kodaly approach to early years, Going for Bronze choir leadership and Levels 1, 2 and 3 Kodaly Musicianship in their Royal Conservatoire of Scotland accredited modules.

Other eclectic activities have included running the African Drumming Society at Edinburgh University, performing as a red beastie drummer at the Edinburgh Beltane festival, singing in the Hereford Choral Society and playing percussion for an international women’s choir in Austria!